This week’s trade minister meeting in Brussels was a rather grumpy family gathering ahead of ‘decision time’ for small but strategic trade agreements with Chile (lithium anyone?), New Zealand and Australia. Here are some other interesting developments.

The first meeting of the EU and Vietnam Domestic Advisory Groups took place on Tuesday this week in the framework of the EU-Vietnam free trade agreement.

The original meeting had been postponed from early June due to difficulties on the Vietnamese side to establish its own DAG.

The fact that Hanoi has finally been able to identify “independent representative organisations” to participate in the group is perhaps no mean feat for what is essentially a one-party state.

Topics up for discussion at this week’s meeting covered the implementation of the trade and sustainable development chapter of the FTA and included the role of civil society, labour law reform, the implementation of a roadmap on ILO ratification agreed with the EU ahead of ratification, sustainable food systems, wildlife trade and global supply chains.

Due diligence was also a subject that was brought up during the meeting, with the EU set to publish its legislation on the issue before the end of the year.

Also this week, on Friday the first EU-Vietnam Civil Society Forum took place. The online meeting brought together members of both parties’ DAGS and representatives from trade unions, business organisations, environmental groups and other civil society organisations to discuss the implementation of the TSD chapters under the FTA.

Meetings of the Civil Society Forum are intended to take place annually, with the report from each meeting to be submitted to the FTA’s Committee on Trade and Sustainable Development and thereafter be made public.

It’s been a long time since the European Commission introduced anti-dumping duties on the simple and plain grounds that exporters were undercutting EU producers due to dumped prices without any further explanation.

Most of the time the EU tries to explain the reasons for the price distortions, often seen as created by government subsidies for production inputs, labour conditions in the exporting countries and/or the non compliance with international environmental treaties.

The EU has being doing all these analytical exercises in its relatively frequent trade defence cases against Russian imports. Until Moscow managed to convince WTO panellists that the EU had a biased underlying trade defence methodology which pre-empts the outcomes of its investigations.

This time round the EU simply avoided going into any details. It is probably easier to simply say Russian firms are actively ‘dumping’ things on the EU market – without any further demonstration as to why Russian prices might be lower than EU prices.

The WTO dispute settlement system isn’t working and Russia didn’t sign up to the Appellate Body alternative MPIA – so it wouldn’t get its case properly heard.

Following Tuesday’s definitive dumping decision, Russian plywood exports will fetch for the coming five years at least a 14.40% to 15.80% duty at EU customs to protect a group of birch producers in Poland and in the Baltics.

The European Commission released an evaluation report of the EU’s 1990s trade agreements with some countries on the other shore of the Mediterranean: Morocco, Tunisia, Lebanon, Jordan among others. These deals are generally limited to industrial tariff liberalisation, done gradually and more thoroughly on the European side.

Attempts made in recent years to bring them up-to-date via Deep and Comprehensive Free Trade Agreements – or DCFTAs – with Morocco and Tunisia have failed. More recent updates to the agreement with Morocco – to include protocols on fish and agriculture trade – were invalidated by the European Court of Justice due to the treatment of the territory of Western Sahara.

Here is a highly symbolic graph of the long-run effects of such agreements on bilateral trade. The impact is overwhelmingly positive for European exporters, as shown in the graph below, which was taken from the report. 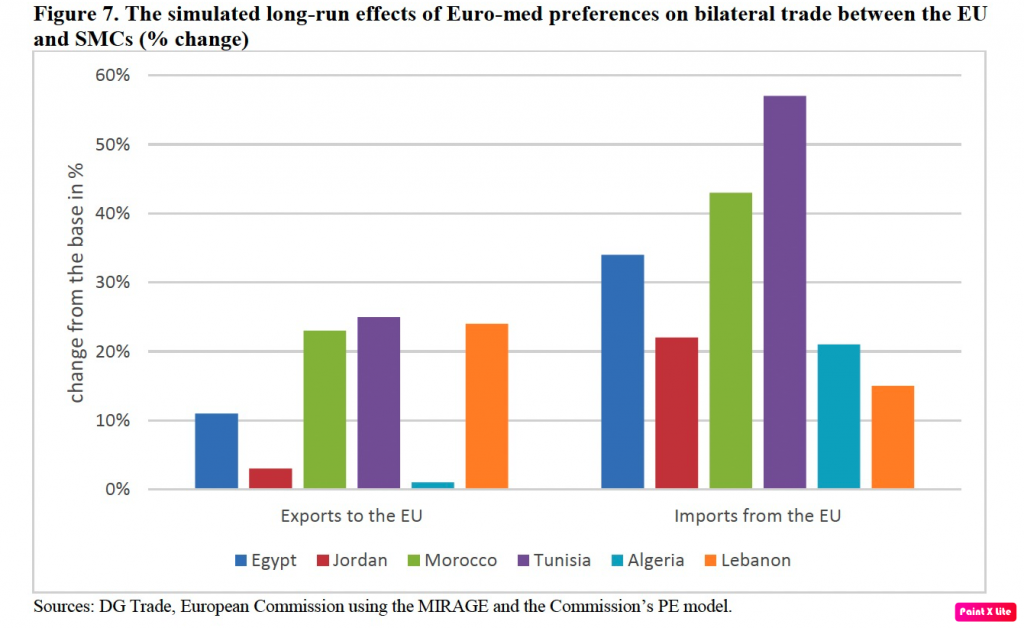 The report also show that the deals contribute to lifting incomes locally due to the fact that they have plugged local production systems to European industrial supply chains. The positive effects are directly correlated to the depth of the trade liberalisation commitments included in the agreements.

So what about the impact of climate change?

“The CGE modelling results show that despite the economic growth predicted by the model, CO2 emissions in the SMCs are estimated to be lower with the Euro-Med FTAs in place than without them. This is largely due to a change in sector structures, where more polluting sectors in SMCs (notably other manufacturing) contracted as a result of the FTA.”