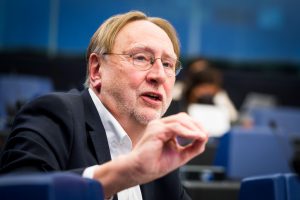 Iana Dreyer and Robert Francis talked to the European Parliament’s International Trade Committee Chair Bernd Lange on what’s next for transatlantic relations and for the World Trade Organisation. He also shared views on the EU’s carbon border adjustment mechanism and Generalised System of Preferences.

We are now several months into the Biden administration. What are your expectations for transatlantic trade relations after the inaugural Trade and Tech Council held in Pittsburgh in late September?

The honeymoon is over. Now we are getting into a realistic partnership with the United States.

The US recognises the European Union as an economic power. They recognise Europe as an entity that was able to tackle the COVID19 pandemic better than the United States, among others. They genuinely seek partnership and cooperation with the EU.

Washington is more interested in getting involved in partnership and cooperation with the EU bilaterally than in engagement in a multilateral setting such as the World Trade Organization. For now, the US will not be a blocking force at the WTO, but neither will it be the engine powering the discussions.

The US under Biden will not be keen to raise trade tensions with the EU following the tariff skirmishes under President Donald Trump.  There is a clear wish to de-escalate. That was one of the reasons for the Airbus-Boeing ceasefire agreed in June. And at the moment I do not expect there to be any other unilateral US trade measures.

Regarding the ongoing negotiations between Brussels and Washington over a removal of Trump-era national security – Section 232 – tariffs on steel and aluminium, I am still hopeful that we will find a solution [by the end-of-year deadline set by the two sides at their summit in July]. Failing this, the EU will proceed with the second tranche of countervailing tariffs.

We must be clear from the start that we are defending our interests in this forum. The Trade and Technology Council is a platform discussion. It is not the starting point for a TTIP 2.0.

It has also become clear from the recent AUKUS episode that we have to look after our European interests within the TTC. We are not naïve.

We should also be careful not to transform the TTC into an anti-China exercise: we have no interest in cold-war style bloc-building.

What are your hopes for the WTO and the 12th ministerial conference?

I am deeply impressed with the new Director-General Ngozi Okonjo-Iweala.

She is able to motivate her counterparts to leave the corner they dug themselves into and join the dialogue. She sometimes even gives them some homework. She has a totally different style compared to her predecessors. And that is important.

Because she is African, it has become a bit easier to engage the African countries and the developing world in the institution. These countries really needed better understanding and a stronger voice in the organisation.

We need at least four outcomes at MC12.

First, there should be an outcome on fisheries subsidies, where we need to accommodate the needs of poor countries but also not exempt a country like China from subsidy disciplines. This is important in terms of delivering on the UN’s Sustainable Development Goals.

Secondly, we need an outcome on the pandemic. Nobody would accept an institution such as the WTO that does not deliver on trade and health at this time. The questions of reducing tariffs on medical products, limiting export restrictions – also the EU’s – and the mutual recognition of regulatory frameworks all need addressing. There will likely not be any ‘hard law’ at MC12, but perhaps a declaration.

Related to this, agreeing on an intellectual property waiver is a political question. The European Parliament is in favour of doing something. But we need to do it in a more limited way than the broad proposal tabled by India and South Africa.

Such a waiver will not lead to an immediate increase in production. It would take a year – or more. But we need the vaccines now. So facilitating exports, tech transfer and cooperation is more important now. We need to give assurances to some developing countries with production capacity that the global community allows them to produce vaccines without IP violation concerns.

Third, agriculture also needs to feature in the list of outcomes. We should agree to increase transparency and better respect the notification commitments by all members. Also, we should already look at MC13, prepare a work plan in agriculture, and find ways to shield public stockholding programmes for food security in developing countries like India.

Finally, we need to agree on a starting point for the modernisation of the WTO, be it the Appellate Body or the rulebook and the working methods, notably on so-called plurilateral agreements. We need EU style ‘enhanced cooperation’ to allow a willing smaller group of member countries to go ahead with new initiatives.

These outcomes would be limited and are not my vision of the institution, which is far more ambitious. But they are needed to restore the WTO’s standing and credibility.

The European Union is overhauling the Generalised Scheme of Preferences. Is it right that the EU is asking for more environmental and labour commitments from developing countries in return for being able to continue to enjoy the same trade preferences?

This is a matter of principle. In the EU we are clear that sustainability is a critical and integrated part of our trade policy, as recognised by the European Court of Justice in its landmark 2015 ruling on the Singapore free trade agreement.

What is more, these environment and labour standards are not European standards. They are universally accepted standards based on international agreements, the Paris Agreement on climate change being just one example. We are not creating new obligations – it is just about implementation.

Trade policy is a powerful tool in the EU’s locker – even more powerful than foreign policy – and we should use it to encourage countries to ratify and implement these international conventions.

On GSP, clear and better monitoring of beneficiary country compliance with sustainability norms is crucial. And we need to bring civil society on board.

There are lessons to be learnt from the previous GSP cycle. In the Cambodian case, it took one and a half years to get to the decision to partially lift trade preferences in summer 2020. We need to respond quicker to violations of international sustainability.

The Commission’s proposed amendments to the GSP, which would kick in in 2024, are a first step in that direction. But count on the European Parliament to improve it.

What changes would you like to see to the Commission’s proposal on a carbon border adjustment mechanism?

Using the revenue obtained through the CBAM for the EU’s general budget is not appropriate for an environmental measure. Such revenue should rather go towards climate protection and towards helping partner countries.

The criteria for third-country exemptions also need to reflect what countries are doing beyond carbon pricing. This is why we need to find some mechanism to recognise these as equivalent. For example, the US is focused on regulation and technological standards, so we need to take that into account.

Finally, we shouldn’t impose a CO2 price on exports from developing countries.

To take an example: two major exporters of cement to the EU are Morocco and Tunisia. Enforcing a CO2 price on these countries would lead to severe economic problems internally. We need to do our utmost to ensure the situation in those countries remains stable.

In the Paris Agreement, developing countries have different obligations. This should also be reflected in the EU’s CBAM.