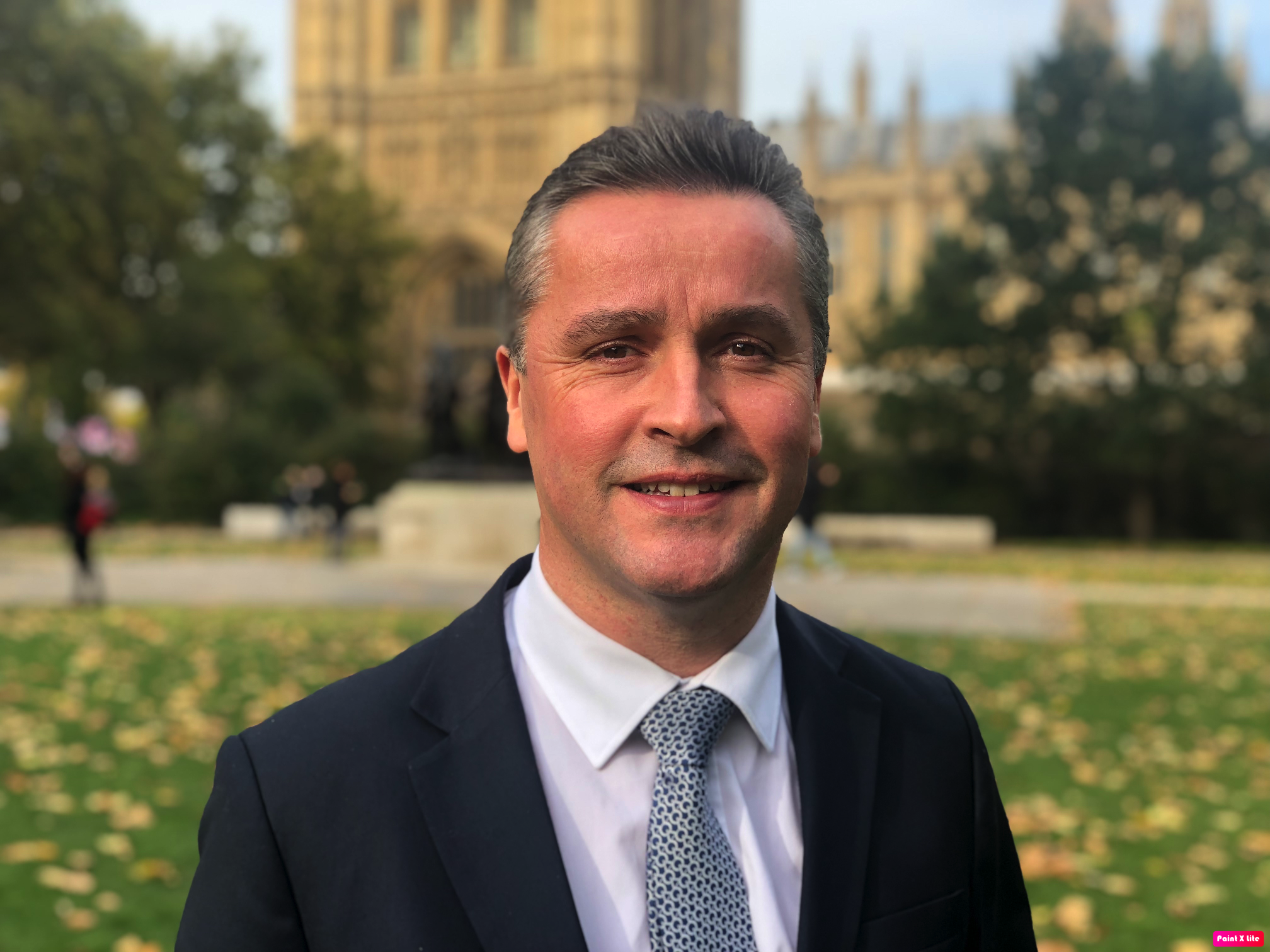 There has been no more persistent thorn in the side of International Trade Secretary Liz Truss in recent times than Angus Brendan MacNeil – the chair of the House of Commons’ international trade committee.

The 50-year-old Member of Parliament represents Scotland’s Western Isles constituency – or Na h-Eileanan an Iar, as the constituency is officially called in the Scottish Gaelic language of which he is a fluent speaker.

A vocal critic of the United Kingdoms’s move to leave the European Union, and a committed supporter of Scottish independence, MacNeil has been chair of the committee since 2017, and as such has spearheaded parliamentary scrutiny of the UK’s evolving post-Brexit trade policy.

The Scottish Nationalist Party member has not hidden his dissatisfaction with the processes for parliamentary oversight of trade deals and other policy decisions, whether within the committee itself – or in the course of an interview this week with Borderlex.

“The UK is now making trade deals with amazing haste. The government has its own rush to have ‘a trade deal in our time’ – and I think this is a problem,” MacNeil said.

According to the trade committee chair, most MPs knew almost nothing about the substance of the recently-concluded UK-Australia FTA,  until the talks were virtually concluded, he alleged.

“Even at the end we discovered more from Canberra than we did from London,” he added.

Government ‘shouldn’t be afraid of a debate’

It is of course far from uncommon for national legislatures around the world to complain about being marginalised by their relevant executive bodies in the course of trade negotiations.

But MacNeil believes that there is something fundamentally imbalanced about the set-up in the UK.

“They [the government] shouldn’t be afraid of a debate in parliament,” he said. “I think it would help negotiators if they were able to say, ‘will this fly through parliament?’ That would be a useful barometer to see what the mood of the UK was by having a debate in parliament about a particular trade issue. But they seem reluctant to do that, because there is such a great rush to get these deals done.”

Scrutiny of trade policy initiatives is the responsibility not only of MacNeil’s committee, but also of the House of Lords International Agreements Committee – and also, in the case of new trade deals, the newly-established Trade and Agriculture Committee, which has the job of examining the compatibility of any deal with existing food, environment and welfare standards.

‘We’re like the auditors who come in after the event’

But, said MacNeil: “The problem we have is that we are just scrutinising – no-one is really shaping an agenda or a mandate. Our scrutiny role is a bit like the auditors who come in after the event to see what has been done, rather than to say, ‘wouldn’t you be better off not doing that?’”

The MP, who is himself a crofter [small farmer] in the Western Isles of Scotland, has been especially critical of the agricultural market access provisions in the UK-Australia agreement.

“The UK government’s next big problem is how to get into the Comprehensive and Progressive Agreement on Trans-Pacific Partnership, and that means that the Australians have ‘seen them coming’ and negotiated accordingly,” said MacNeil.

“I don’t think Australia has this level of market access [full duty-free access to the UK’s agricultural markets within 15 years] anywhere else. They might not use those trade openings in the beginning, but they do now have the security blanket that they can sell into the UK if things go wrong for the Australians elsewhere in the world.”

‘What is the UK’s trade strategy? There isn’t one at the moment’

MacNeil was more equivocal about the merits of the international trade secretary’s recent controversial decision to partially overrule the recommendations of the UK Trade Remedies Authority and reinstate some of the safeguard measures on steel imports which had been slated for removal.

But he claimed that the decision pointed to a wider problem with the UK’s trade policy.

“But the bigger picture question is – what is the UK’s trade strategy? There isn’t one at the moment. The strategy seems to be to get as many as bits of paper as possible signed off to say we’ve signed more trade deals with more countries – most of which are rollovers – and to get into CPTPP. Why, and for what purpose, is not clear.”

Even though the department for international trade does not have a mandate for relations between the UK and the EU – this is the responsibility of the cabinet office under Lord David Frost – MacNeil is very exercised by the contrast between the UK’s stance of trade openness towards non-EU countries, and a much less positive approach towards the bloc which it has just left.

The MP has been fond of assessing the calculated value of new UK trade deals using the net cost of Brexit to the UK economy as a kind of index.

His baseline is the 4.9% long-term reduction in UK GDP resulting from Brexit, which was calculated in a government study dating from 2018.

“That means that for every £490 that Brexit has cost, the Australia trade deal will get you back £2. The New Zealand one gets you one pound back.

At a recent session of the international trade committee, Liz Truss gently chided MacNeil for “living in the past” and harking back to an EU membership which no longer exists. But MacNeil was unrepentant.

“Liz Truss hates the numbers,” he said. “Of course, Brexit is not really made on numbers and economics, it’s made on other kinds of stuff. But the numbers are relevant. Even if the Australian trade deal is, let’s say, 100% better than we thought, then you’ve got a £4 gain. But if Brexit is just 1% worse, you’ve wiped out that gain.

“That’s a problem for Liz Truss in trying to sell the trade deal narrative to people,” commented MacNeil. “It really come unstuck with numbers, and she doesn’t like that.”

“Once the prose and the flowery language is taken away, this whole Brexit-and-trade-deal stuff isn’t really a good deal at all,” he continued.

“And in the case of the Australia deal, you’re getting £2 back and you’re risking farming for the £490 you’ve lost. The more people that understand that, the better.”

No formal consultation with devolved governments on trade policy

As might have been expected from a Scottish nationalist politician, MacNeil was especially scornful of current provisions for consulting devolved administrations in Wales, Scotland and Northern Ireland on trade policy matters.

“There is really no kind of formal consultation process with the devolved administrations,” he said. “There are probably informal briefings which don’t tell you anything very much.”

He went on: “When the Scottish government sees the UK-Australia agreement they can moan all they want about the potential risks to farming.

“The UK government won’t care, because from their point of view, the idea that you can run the underground rail system in Melbourne [as part of an agreement on government procurement] has been a price worth paying. But every trade deal has its winners and losers.”

MacNeil and his party are supporters of Scottish independence, and their policy is for an autonomous Scottish state to accede to the EU as soon as possible after breaking away from the rest of the UK.

As things stand, this would mean the erection of border posts along the England-Scotland border – which would then form another land border between the UK and the EU single market.

Would MacNeil be comfortable with that scenario?

“Yes,” he said simply. “We’d want dynamic alignment with the EU. The choice would be either to align with the minnow that has a hard border with everybody – that’s the UK choice at the moment – or, as would be our choice, to have open borders with 27 other countries. We’d be in a similar situation to Ireland.”

But MacNeil said he had still not given up hope of the UK changing its mind and putting Brexit into reverse.

“Hopefully Scottish independence will be something that makes them see a bit of sense,” he said.

“Maybe it will be the final jolt to make them say, ‘Let’s be sensible here, let’s reinstate economic growth, let’s get that £490 back’, and we’d avoid all that.”