NGOs such as Médecins Sans Frontières (the French ‘Doctors without Borders’ humanitarian organisation) are joining the campaign of developing countries led by India and South Africa at the WTO who are asking for sweeping flexibilities and/or a waiver on intellectual property rules. The aim is to help boost medical and in particular COVID-19 vaccine production. 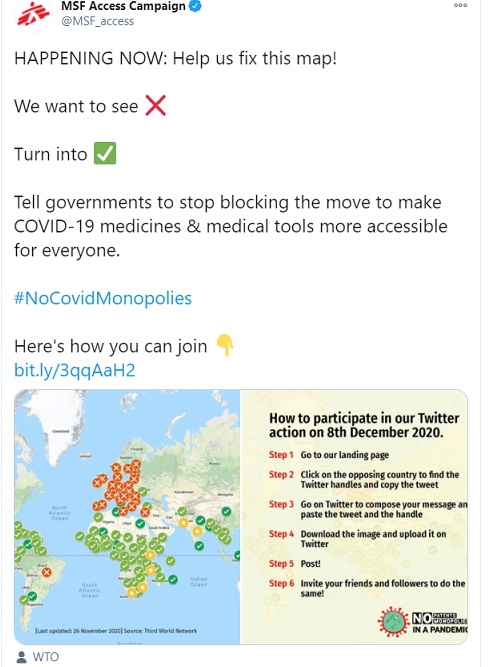 India, the African Group and Cuba are upping their game ahead of the last General Council meeting of the year at the World Trade Organization next week.

The move comes at a time when bigger and richer ‘beasts’ in the organisation are pushing for new agendas on environment, subsidies and developing country ‘graduation.’ Discussion on reform of the world trade institution is maturing – and it is clear this group of countries now wants to respond – if not push back.

You want reforms? But what has the WTO delivered for us?

“Developing Members have called for certain reforms in the WTO since 1996 in an effort to address asymmetries and bring balance to the WTO rules, as well as create more policy space for themselves to pursue development and to use the same policy tools as developed countries to industrialize. The reform agenda put forth by developing Members was incorporated into the Doha Development Agenda in 2001,” the communication reads.

“This included the strengthening of Special and Differential Treatment Provisions, Implementation Issues, addressing the existing asymmetries in the WTO Agreements, particularly in Agriculture with a view to facilitating the realization of the SDGs on food security and alleviation of rural poverty.”

So, doing plurilateral agreements? Not if it involves doing away with the consensus rule in the WTO – a rule some leading members of the organisations have said they would want to get rid of.

“WTO reform’ does not mean accepting either inherited inequities or new proposals that would worsen imbalances. Reforms must be premised on the principles of inclusivity and development… Inclusivity would require, at a minimum, preserving consensus decisions in the WTO,” the group of countries states.

You, rich countries, want us to stop claiming rights due to our developing country status? We won’t let that happen. “Special and Differential Treatment (S&D) is a treaty-embedded and non-negotiable right for all developing Members.” Graduation according to measurable criteria – such as proposed by the US? No way! “Developing countries must be allowed to make their own assessments regarding their own developing country status (self-determination),” and “S&D must be provided in current and future negotiations.”

So, dear US, EU and Ottawa Group members, you want us to notify our trade measures more diligently? OK, but we need money.

“Developing countries face challenges in complying with all their notification obligations due to human resource and institutional capacity constraints. Any non-compliance is not willful…. Any work in this area must be in the provision of capacity building to developing countries.”

Also, you, rich countries, are not diligent in reporting your own distortive agricultural subsidies: “Developed Members themselves should lead by example in submitting comprehensive, timely and accurate notifications. They have not always done so.” Therefore: “In the area of Agriculture, developed Members, as they have Final Bound AMS entitlements should submit their notifications within 3 months of the end of the year (calendar, marketing or fiscal year). Many developed Members have taken up to two years or more to do so.”

Perhaps the only area where the developing country group concurs with the broad membership of the organization – minus the United States – is the Appellate Body, where the countries state that “restoring the Appellate Body and the two-tier WTO DSU” is the only way forward. This, the group states, should be done upfront before engaging in any wider discussion about WTO reform.

The idea was floated ahead of theWTO’s 2017 Buenos Aires ministerial meeting already: when the United Nations’ World Food Programme purchases food for emergency food aid, WTO members should refrain from banning such sales.

Now the proposal is back post-COVID 19. Sponsored by a list of 46 WTO members (counting the EU as one), led by Singapore, its stipulation, submitted as a draft General Council decision circulated today, is straight and simple: “Members shall not impose export prohibitions or restrictions on foodstuffs purchased for noncommercial humanitarian purposes by the World Food Programme.”

Brazil, China and South Africa have voiced support for the initiative, according to WTO sources. The African group, the ACP) group) Nigeria, South Africa and Pakistan raised concerns regarding  national food security. The African Group and Nigeria asked for changes  so that least developed countries and net-food-import developing countries could be exempted from the obligation.