The Regional Comprehensive Economic Partnership, alongside the CPTPP, is a powerful counterexample to ongoing global decline in rules-based trade. If these agreements deliver what they promise, its members, including China, will gain more economic and political influence across the world, writes Nikos Lavranos.

On November 15, 2020, fifteen countries from the Asia-Pacific region signed the Regional Comprehensive Economic Partnership Agreement also known as RCEP, which, upon entering into force, would create the world’s largest free trade area in the world.

The signatories to the RCEP are ten members of the Association of Southeast Asian Nations: Malaysia, Indonesia, Vietnam, Thailand, the Philippines, Laos, Cambodia, Myanmar, Singapore and Brunei, as well as Australia, China, Japan, New Zealand and South Korea. While India also participated in RCEP negotiations, it ultimately declined to sign the agreement.

The deal will enter into force for the ratifying states after it is ratified by at least six ASEAN and three non-ASEAN signatories.

This is much larger than the CPTPP which was signed 2018 and to which China is not a member, while US President Trump pulled the US out of the CPTPP on his first day in office.

Indeed, the deal marks the first time that the rival East Asian powers China, Japan and South Korea have been in a single free trade agreement.

RCEP will over a 20 year period reduce or remove most tariffs on industrial and agricultural products. Moreover, significant commitments in various service sectors, such as financial services, telecommunications services and professional services. 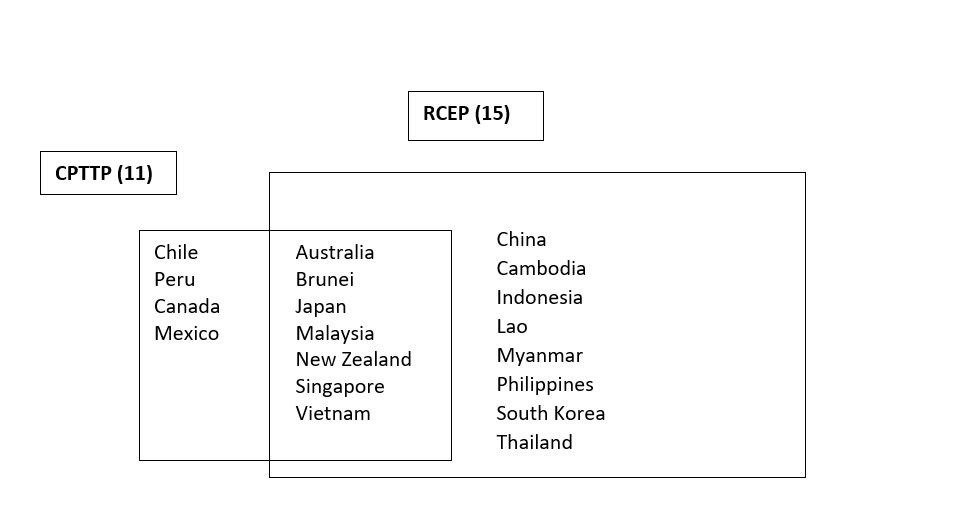 A wake-up call for the EU

The EU has always recognised the potential trade and investment benefits in Asia and therefore has been engaging in this region for some time now resulting in several free trade agreements. More specifically, in the past couple of years the EU has signed FTAs with Singapore, Vietnam and Japan.

Moreover, the EU has been negotiating an investment treaty with China and hopes to finalise it in the next one or two years, although progress appears to be slow.

FTA negotiations are also well underway between the EU and Australia and New Zealand.

Besides, the EU has been or is involved with FTA negotiations with Indonesia, the Philippines, Thailand and Malaysia.

However, in comparison with the fast developments in Asia, such as the recent conclusion of the CPTPP and now the RCEP, the EU’s progress is rather slow.

This gives China, Japan and South Korea a competitive advantage to intensify their trade and investment relations in the region.

In addition, the complete absence of the US in the region does not help the EU in containing China’s expanding economic and political influence in Asia.

Although, with the new incoming US President Biden, the US might start re-engaging in the region, for example by joining the CPTPP, which could probably result in competing with the EU rather than teaming up with the EU.

If one compares the RCEP with the CPTPP, it becomes apparent that RCEP does not cover – at least for now – several important areas, which are nowadays standard practice in modern free trade agreements.

In contrast to CPTPP, the agreement says nothing at all about labour, the environment, or state-owned enterprises, which are all key chapters in the CPTPP but also in the EU-Singapore or EU-Vietnam free trade agreements.

Setting standards in an international trade agreement on labour and the protection of the environment has proven to be highly political in every trade agreement, whether in the case of NAFTA or CETA. The diverse group of RCEP member states has added further complexity to these issues, so it is not surprising that these chapters were left out.

At the same time, many of the RCEP member states have serious problems with protecting and enforcing minimum labour standards and protecting the environment, which in fact would call for their inclusion.

Similarly, politically sensitive is the issue of state-owned enterprises given the fact that in many RCEP member states they play a central role in the economy – not least in China. Thus, it would have been a waste of time to try to agree on any rules on regulating state-owned enterprises, although the CPTPP illustrates that it can be done.

A similar level of flexibility applies to the trade facilitation chapter, which includes an annex in which some individual member countries negotiated different timelines for date of entry into force for specific provisions.

The final text of the RCEP does not contain investor-state dispute settlement (ISDS) provisions although that was the intention from the beginning. However, New Zealand’s new government has pledged that it would not sign up to any trade agreement that contains ISDS provisions and thus essentially prevented the inclusion of them.

As a compromise, the RCEP parties agreed to enter into discussions and agree on ISDS rules within the next five years. Accordingly, it is still possible that in the long-term some kind of ISDS rules will be included, potentially also taking into account the possible establishment of a multilateral investment court.

The investment chapter also contains a number of restrictive provisions although these are included in other recent free trade agreements. These include:

Indeed, the RCEP contains a specific provision, which states that “with respect to any provision of the WTO Agreement that has been incorporated into this Agreement, the panel shall also consider relevant interpretations in reports of WTO panels and the WTO Appellate Body”.

The RCEP agreement contains an essentially similar chapter on electronic commerce as the CPTTP.

The economic importance of electronic commerce is recognized by the commitment to facilitate paperless trading, adopting measures for online consumer protection and online personal information protection.

In addition, the current practice of not imposing custom duties on electronic transmissions is reiterated. There is also a provision on cyber security which states that “the Parties recognise the importance of building the capabilities of their respective competent authorities responsible for computer security incident responses, including through the exchange of best practices, and, using existing collaboration mechanisms to cooperate on matters related to cyber security.”

As in the CPTTP, the RCEP has a specific chapter on the protection of intellectual property rights. While the RCEP parties agree that protection of intellectual property rights is important, it also states that the “parties’ different levels of economic development and capacity, and differences in national legal systems” must be taken into account.

Moreover, the provision emphasises the “the need to maintain an appropriate balance between the rights  of  intellectual  property  right  holders  and  the legitimate interests of users and the public interest”. As such the RCEP does not seem to go further than the WTO TRIPs agreement.

Despite the fact that the RCEP agreement is less ambitious now, the parties have agreed to use the RCEP as a constant platform for further negotiations and rule setting in Asia in the future.

Indeed, it is significant that a RCEP Secretariat has been created as well a RCEP Joint Committee consisting of senior officials designated by each party, which will facilitate the management of the treaty and further negotiations.

RCEP must be seen as a dynamic framework agreement, which creates the possibility to agree in the future on additional common rules in many policy areas.

Whether this happens or not, RCEP offers the potential of boosting trade and investment in this region. According to estimates by the Peterson Institute for International Economics, the CPTPP and the RCEP will raise global national incomes in 2030 by an annual $147 billion and $186 billion, respectively. They will yield especially large benefits for China, Japan, and South Korea and losses for the United States and India

At a more global policy level, RCEP and the CPTPP are powerful counterexamples to the ongoing global decline in rules-based trade. If these agreements deliver what they promise, its members, including China, will gain more economic and political influence across the world.