Chris Southworth, secretary general of the International Chamber of Commerce United Kingdom, shares his views with Borderlex’s Iana Dreyer on Britain’s prospects as a trading nation after Brexit. On the menu: the UK in the World Trade Organization in the Trump era, rolling over 40 existing EU trade agreements with 60 countries, launching new free trade negotiations and managing transitions with partners outside the European Union.

What is the UK’s role in the world trading system after Brexit? 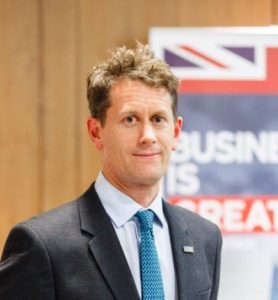 The idea of the United Kingdom being a strong advocate of responsible free trade is a very exciting proposition. The UK is a founding member of the free trade movement going back hundreds of years. British people, whatever their view on Europe, are free traders. We are a proponent of the rule of law and rules-based institutions like the World Trade Organization.

There is a very strong feeling that we must maintain and support rules-based institutions. But that will need reform. We recognise that the institutional structures are out-of-date and that we have to modernise them – and that’s a healthy process. We don’t agree with those attacking the system.

I’ve never believed the UK would go into meltdown on leaving the EU. The UK is very resilient. It will continue to trade and it will be successful – it will just adapt.

The UK has a lot of diplomatic resources. It is heavily invested in the international system. It has more experience than many European countries in practising international diplomacy. The idea of having a country like Britain facilitate and instigate the dialogue that needs to happen is a good thing.

British trade policy teams are rapidly increasing in size and capability. They are very different now compared to two years ago. They’ve really scaled up and they have good people. As a country, we haven’t negotiated trade agreements in a long time, that is true. But there is that inherent knowledge in the system of how to engage in diplomacy with powerhouses such as China or the United States, even though we know that can often prove to be very difficult.

The UK has always been a bridge between nations and has maintained its position as a pragmatic nation diplomatically. It continues to be a voice of Northern Europe in the UN and WTO. That will happen while the UK is a member of the EU, and that will happen once it no longer is. I’ve always seen the UK as a sort of staging post between Europe and the great powers outside of it – the US or China, for example. We will continue to see more of that in future.

What about the future trade relationship with the EU?

What’s unclear is Britain’s long-term relationship with the EU. And that is fundamental. Brexit is full of contradictions. The British government is talking about leaving the EU and being an independent free trade nation – which is great.

But leaving the EU means putting border controls in; independent trade policy cannot exist without it. The downside is that we will be coming out of a seamless club with no border controls. Everyone who works in trade knows that contradiction.

From a business point of view, there is support for a ‘third way’. To businesses, staying in the EU customs union and accepting being a ‘rule-taker’ is fine. That effectively maintains the business environment on borders. But from a political point of view, there have only ever been two options: either you are in or you are out. We have a minority government, and its ability or likelihood to bring in a ‘third way’ is minimal to non-existent.

Big, multinational companies are not all affected by Brexit. But there are issues around protectionism, nationalism and attacks on multilateralism which are and should be of serious concern.

On rolling over existing terms from EU free trade agreements

Everyone is being told consistently by the government that we are going to be rolling over our existing terms [currently in place via 40 trade agreements negotiated by the EU] with 60 countries.

I don’t believe that is what’s going to happen. Yet that is not what we, the public, are being told or what businesses are being told. The focus now is to try to bring some facts to the table and raise awareness that this is not how the system works.

Why on earth would any of those third countries roll over terms with the UK? There is no evidence that any of them are going to roll over existing terms: in fact, it’s quite the contrary.

And anyone that does so is going to ask for favours in return.

The recent agreement in principle to roll over the EU’s EPA with the Southern African Development Community leads me to ask: What exactly has been agreed? We haven’t been shown any text. The second question is: What’s the catch?

No third country wants to see the UK in a state of disruption.  Nobody wants to see a bad outcome. Everybody has good intentions. But it’s perfectly legitimate and probably reasonable for a third country to tell the UK government: let’s roll over terms for the next three years and then we will review the terms.

The UK needs to arrange deals with 60 countries just to stand still! That will be an incredible feat.

On new trade deals – particularly with the United States

The UK wants to negotiate new free trade agreements with Australia, New Zealand and the United States immediately on leaving the EU next year.

A trade deal takes an average of five to seven years to negotiate. Negotiators can probably speed that up, but there is a process that they must go through. Some of this work is very technical and some of these issues are very difficult to solve politically. There is no easy shortcut .

As a country, we are very pro-US. But when it comes to standards and values, we are much closer to France, Germany, Northern Europe and the Scandinavians than we are with the US. That’s particularly true when you get down to the civil society and consumer level. There is no way a British consumer will want to buy chlorinated chicken or hormone beef. They simply won’t accept it, for exactly the same reasons others in Europe won’t accept it. The public certainly won’t accept the US asking Britain to open up public services to open competition.

All in all, once we add up the value of extra trade with Australia, New Zealand and the US markets, it still won’t come close to the loss in trade we will experience from the current seamless access to the EU’s single market. All of this takes us back to the deal with the EU. How will we make up for that cost on businesses?

So what next? No deal? Deal?

Businesses are planning for the worst – the ‘no deal’ scenario. Many are beginning to map the supply chains, the costs, the employees and anything better coming from a ‘deal’ with the EU will be a bonus.

The much bigger concern is the trading partners. Few of them have experienced this workload, except perhaps the auto sector. It’s surprising how few British trading partners inside the EU have mapped out the issues of access to finance. Once those taps are switched off from London, there will be a direct impact on people’s access to finance right across Europe. For example, Italian businesses may find themselves paying much more for finance, the Spanish may find they are unable to access finance because their relationships with London have dried out overnight. Things will change very quickly after Brexit, and businesses won’t necessarily be prepared.

We must do a better job at communicating overseas, especially outside of Europe. We forget that there are countries trading into the UK and then on into the EU – and vice versa. Other than the US and Japan, both of which have been active from the beginning, there are other involved third parties that we have not communicated with at all. For example, Brazil, Mexico, Chile and Nigeria. We need to bring them in to the conversation. Their voices haven’t been heard at all.