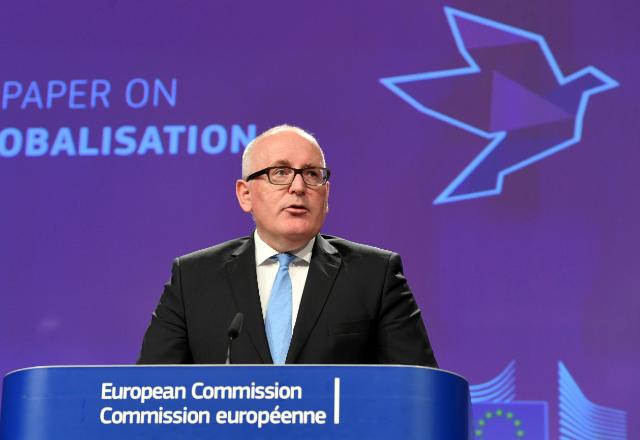 “Any society needs a social contract and that social contract means a spirit of community”, the social-democrat Dutchman said. “All the other things, better regulation, better energy union, better results in the internal market – people will say okay fine but what about us what are we as a community?”, said Timmermans.

Timmermans is one of the key architects of the White Paper on the Future of Europe, a reflection paper released in the early months of 2017 ahead of celebrations of the 60th anniversary of the EU in March, and in the context of a feeling of deep crisis in the European project, reflected in a populist uprising and the decision by the United Kingdom to leave the bloc.

Timmermans is not directly in charge of trade policy, but many files, from data protection, to sustainability and any legal and rule of law issues, all related to recent trade negotiations or trade files, pass through his filter before heading for the desk of Jean Claude Juncker, the Commission’s president.

“Trade has fascinated me”, said Timmermans. “It has galvanized so many feelings and ideas [on issues] that were left to technicians before and which have now become part of a public debate”, the EU official believes.

“This gives us the opportunity to create fairer trade with all of society at large. These are huge opportunities for Europe”, Timmermans reckons.

In the past “we trusted the technocratic approach to trade. We just assumed trade was good, the freer the trade the better”, so Timmermans. That is over.

“The nature of trade has changed. It is no longer about tariffs. It’s also about norms, standards, services, and production norms. And that is a very topical issue in our society”, the Commission leader said. “This should be an opportunity for us to be far more transparent and engaging on trade issues”, he reckons.

“Will this slow us down? Undoubtedly. But will this create an opportunity to create public support for trade? Yes, if we can demonstrate that we are not just talking about freeing up everying, that we are talking about creating fair trade systems across the world”, so Timmermans.

The Commission official said that Brussels has been “slightly myopic if not entirely blind to the downsides of globalisation for too long”.

Among these downsides, Timmermans cited “the fact that certain major corporations don’t pay tax; the fact that we still don’t know when we import things whether these things were produced from slavery, or whether they [corporations] are using the most horrible extraction techniques in other countries.”

“People have woken up to that part of globalisation and are worried about that. We need to address these worries”, the former Dutch politician said.

Asked whether there can be public support for freer trade, Timmermans said: “I am an optimist about this”. But this must be flanked my measures aimed at addressing the concerns raised by the public.

Citing the case of the politics surrounding the contentious EU Canada CETA, and changes brought to its investment protection system to shift away from private arbitration to resolve disputes between investors and states, Timmermans said that these “changes in CETA have been seen by many trade unions as positive.”