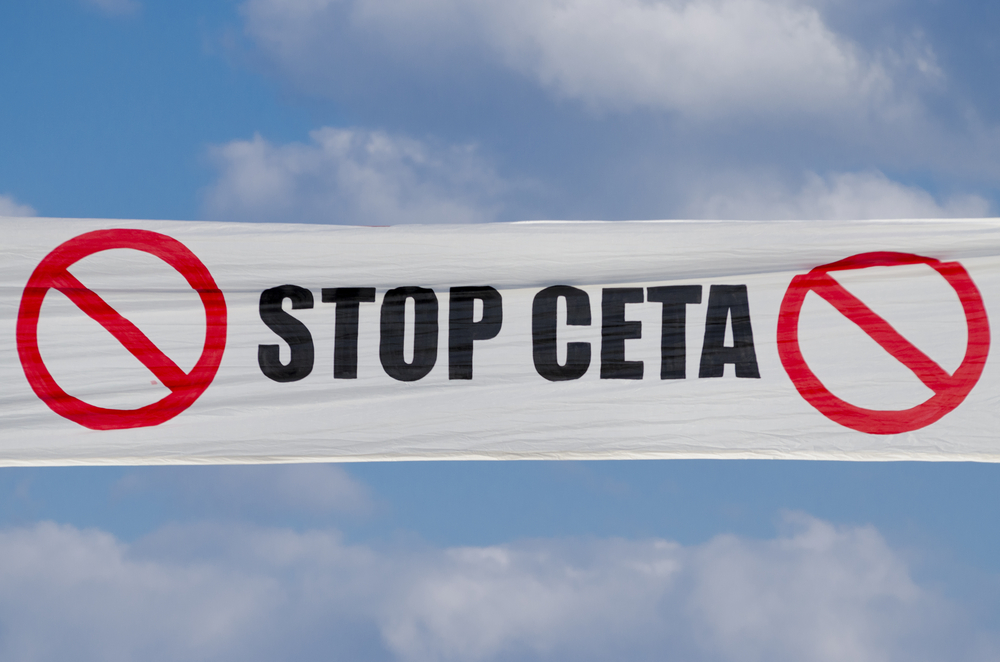 With Donald Trump in office in Washington, it is time for Europeans to lead on trade. This would also start with stopping public funding of anti trade agreement campaigners, who find themselves strange bedfellows with the far right and with Trump himself, argues Nikos Lavranos.

The President of the United States Donald Trump, less than two weeks in office, has taken significant steps to reverse the US’ free trade policy of the past decades.

As a first step, he has issued an Executive Order cancelling the US signature to the Trans Pacific Partnership (TPP) agreement which was concluded in February 2016 by a dozen Asian and Pacific countries and the US.

As a second step, Trump has repeatedly stated that the NAFTA agreement must be renegotiated. This was followed by a threat to impose import tariffs against Mexican imports in order to collect money for paying a wall, which he plans to build at the US-Mexican border aimed at keeping Mexican and Central American migrants at bay. Clearly, the unilateral imposition of import tariffs would constitute not only a violation of the NAFTA agreement but also of the WTO agreement.

As a third step, Trump has “convinced” big American companies to invest in the US instead of abroad and to create jobs in the US. The credo of Trump has been ‘America first’ and ‘Buy America, Hire America’.

Be that as it may, one thing is clear: Trump has shifted the US trade policy from a multilateral, free trade approach towards a bilateral, protectionist approach.

A similar push against globalisation and free trade agreements started a few years earlier in Europe, notably with the start of the TTIP negotiations and the conclusion of CETA. However, in contrast to the US, the push against free trade agreements and investment arbitration is coming from NGOs and left parties, both at the European and Member States level. These ‘anti-ISDS’ and anti-trade groups have been successful in delaying and eventually halting the TTIP negotiations and – with the help of the government of the Belgian region of Wallonia – almost prevented the signing of CETA.

The irony of the situation is that the European Commission and several Member States have been heavily subsidising these anti-ISDS/anti-trade groups.

The result of this has been that the EU has failed to ratify any free trade agreement so far.

Indeed, the EU and many Member States with the notable exception of the UK, which is preparing to leave the EU, are seemingly saying good bye to free trade agreements and are also turning towards protectionism.

Even more perplexing is the fact that some of the most far right politicians in Europe, such as Marie Le Pen and Geert Wilders, who both are leading the polls in France and the Netherlands respectively, are joined in their anti-trade approach by the Greens and Socialists in the EP and in many Member States.

In fact, the same was true also in the US during the presidential campaign where US Democrat candidate Bernie Sanders applauded US President Trump when he pulled the US out of TPP.

In short, US President Trump finds himself with left wing NGO and large parts of the European Parliament as well as left wing US Democrats as strange bedfellows, sharing the same aversion against free trade agreements, globalisation and multilateralism.

That is an extraordinary development, which inevitably is an invitation for China to fill in the gap. Indeed, some TPP signatories are openly inviting China to replace the US, which would indeed be ironic, since the very reason for creating TPP without China was to contain the ever-expanding political and economic hegemonic attitude of China in Asia.

Now that US President Trump has shown no interest in TPP, this will only strengthen China and make it even more self-confident.

No time to waste on trade agreements

Meanwhile, the EU and its member states are losing precious time until the Court of the Justice of the EU has rendered its opinions on the EU-Singapore FTA concerning the question of ‘mixity’, and potentially on CETA, in particular regarding the proposed investment court system – ICS.

Whatever the outcome of these opinions will be, they certainly will slow down the negotiations for the on-going FTA negotiations between the EU and a dozen other countries, such as for example China, Japan and Mexico.

In conclusion: it must feel very awkward for the anti-trade groups to be the bedfellows of US President Trump – that could not have been their noble intention when they launched their vicious public campaign against CETA, TTIP and ISDS.

Be that as it may, the fact remains the EU and many Member States are financially and politically supporting the very same anti-trade groups, which are pursuing the same protectionist agenda as US President Trump.

History over the past centuries has shown that protectionism is – in the long run – more damaging than free trade and the free movement of goods, services and persons. Since World War II, the EU is the best proof of this: a model which has also been copied to some extent by the Andean Community, Mercusor, ASEAN, ECOWAS, and others.

Accordingly, protectionism cannot be the way forward. A strong signal by the EU and its Member States against protectionism is needed – as soon as possible.

But words cannot be enough; the EU and its Member States must also act accordingly.

In a first step, they should stop the financial and political support of anti-trade groups, which turn out to be strong supporters of the protectionist agenda of US President Trump.

In a second, step, the EU and its member states should prove to the world that they are reliable trading partners by ratifying quickly CETA, the EU-Vietnam and EU-Singapore FTAs without the usual political squabbling.

Nikos Lavranos is Secretary General of the European Federation for International Law and Arbitration.

Views expressed by columnists on Borderlex.eu are solely those of their authors.