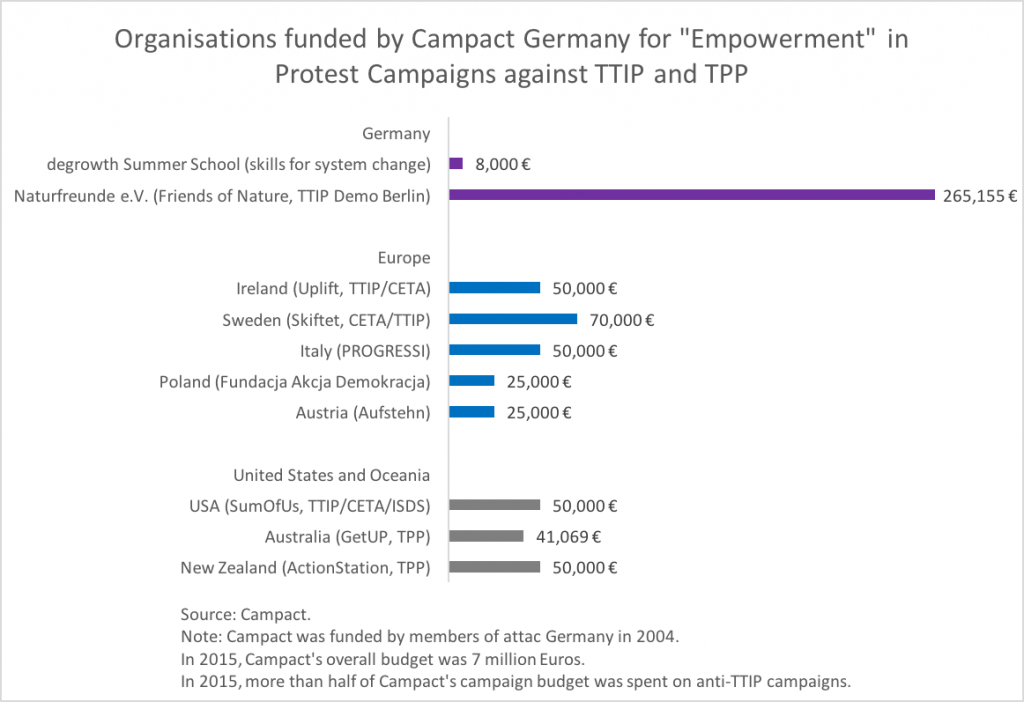 Has Germany’s public debate on TTIP been hijacked by two minority political parties? At least some evidence is now emerging that the discussion on the transatlantic treaty has been distorted by a highly active network of ‘civil society’ groups gravitating around the German green party Die Grünen, a hard left party called Die Linke, and the left wing of the country’s social-democrats.

Matthias Bauer, a data cruncher at the free trade think tank ECIPE in Brussels is putting together some numbers on a striking phenomenon. Indeed, though Germany – of all EU countries – depends on free trade to thrive and Germany has been a major proponent of transatlantic free trade, Germany has become the epicentre of EU public opinion opposition to the transatlantic trade deal under negotiation between Brussels and Washington.

The latest Eurobarometer poll puts German support for TTIP at a mere 26 percent, whereas the EU average stands at 51 percent. Berlin hosted an impressive anti-TTIP demonstration in Berlin in October 2015 attracting more than 250.000 people.

This is translating into caution and scepticism in mainstream parties in Germany, especially the centre-left SPD, whose leader Sigmar Gabriel is also Germany’s Vice-Chancellor. Gabriel’s misgivings about TTIP are now widely known. The SPD also has one important envoy in Brussels, Bernd Lange, the MEP who chairs the trade committee in the European Parliament. Lange gas been highly ambivalent about TTIP.

ECIPE’s Bauer has built and analysed a dataset of 1500 “TTIP information events” organised throughout Germany between February 2015 and February 2016. Bauer has also examined online coverage of TTIP in Germany.

“The protest actions against TTIP were supported from the start by the parties Die Linke and  – after its disappointing results in the German general election in 2013 – by the Die Grünen”, Bauer notes.

Die Linke are a hard-left splinter group of the SPD and Die Grünen Germany’s third largest party. Both have just above 60 MPs in the German Parliament, whereas the SPD has 198 seats and Angela Merkel’s centre-right group CDU/CSU has 310 representatives in Berlin.

Bauer notes that, when weighted according to the number of their voters in the Bundestag, Die Grünen, the SPD and die Linke have organised most public information meetings on TTIP.

Anti TTIP activism also varies according to different regions. The most active anti-TTIP regions in Germany are the densely populated North-Rhine Westphalia and Bavaria. “The anti-TTIP scene in North-Rhein Westphalia is only overtaken by Bavaria, where the free trade opponents of attac together with the Umweltinstitut München [an environmental group] appropriate themselves the interests of the local Bavarian farmers”.

ECIPE’s Bauer explore the individual networks of leading TTIP opinion formers in Germany. For example, the MEP Sven Giegold, a leading Greens politician, is also adviser to Attac Germany and to Campact, he is also a former Die Grünen delegate to attac, a member of Verdi, a public sector labour union, and member of the board of the protestant network Evangelischer Kirchentag, among others.

INTA’s Bernd Lange for his part used to be a teacher of religion in German schools, a member of the union IG Metall and a member of the environmental organisation Naturfreunde.

The paper explores the role of German organisations in a Campact-orchestrated “citizen’s initiative” petition against TTIP that garnered more than 3 million signatures in the autumn 2015. “More than half the signatories are German and those who pull the strings sit in Berlin”, Bauer notes.

A final characteristic of the German anti TTIP campaign juggernaut is its savvy use of the worldwide web. “When in Germany someone googles “TTIP”, interested students and insecure citizens and voters automatically land on a link financed by Die Grünen to the “The Greens’ Position on TTIP, CETA” – placed at the top in the search results; [this is ] followed by commercial advertisements about TTIP from the Umweltinstitut in München, Foodwatch, and Greenpeace”.

Bauer finds no official links to funding from countries hostile to the idea of TTIP such as Russia. But he notes that the campaign’s message is widely echoed in the Russian government-sponsored media Russia Today. That media “is very popular among national conservatives and in socialist circles”, Bauer notes.